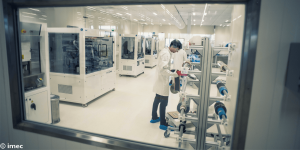 Researchers at Imec specialise in nanoelectronics, digital and energy technologies, and have formed a research team under the umbrella of EnergyVille to focus on sustainable energy and intelligent energy systems. Together they have developed proesses that rely on a solid nanocomposite electrolyte in combination with a standard cathode made of lithium iron phosphate and a lithium metal anode. The solid electrolyte has an exceptionally high conductivity of up to 10 mS/cm (microsiemens), and according to an Imec press release, has the potential for even higher conductivity.

The new material is characterised by its ability to be applied as a liquid via a wet chemical coating. Only then does it harden and transform into a solid. This creates a particularly close connection between the electrodes and the electrolyte – one of the major challenges for solid-state batteries.

Imec / EnergyVille said they are working with the University of Hasselt on a pilot line for the production of solid-state pouch cells at the EnergyVille campus in Genk to improve materials and processes. The aim is to test the scaling of solid-state cells.

According to Imec, the cells can be assembled on “slightly modified” production lines for Li-Ion batteries. High investments in completely new production facilities would not be necessary if the wet cell facilities could also be used for the solid state cells. “The new battery demonstrates that our breakthrough electrolyte can be integrated in performant batteries,” says Philippe Vereecken, scientific director at Imec / EnergyVille. “The pilot line allows us to take the next step and scale the battery breakthrough to industrially relevant processes and formats by using manufacturing processes similar to those for wet batteries.”

For the upcoming phase, the research centre will be talking to the world’s major material suppliers and battery manufacturers to optimise opportunities for driving the technology forward.

Leclanché and Comau team up for freight batteries