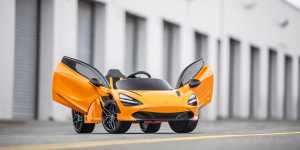 A but or two actually. McLaren now also offers its iconic 720S sports car with an electric motor – at least for children. Only the benefits of electric mobility have not yet been fully understood at McLaren…

Not only is McLaren’s electric car but a toy and an expensive one on top at 356 euros. But also the McLaren 720S ‘Ride-On’ is equipped with a “functioning accelerator pedal with additional engine noises”. Ehm?

Well, McLaren thinks there is a reason, stating this is “because we all like to hear an engine!” Er…who does?! Besides which – parents usually one or two things to say about annoying sounds on children’s toys.

To their defence, two years ago McLaren had proved a little more foresight when issuing the P1 hypercar in a kids edition and fully electric as reported. Plus, even the toy model is thus in line with AVAS regulation, strictly speaking. So here is a view on how electric cars could sound like.