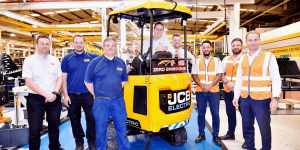 The British company JCB has started series production of its electrically powered 19C-1E mini-excavator and has already delivered the first 50 units.

The company’s first electric diggers are now being produced in Staffordshire, with deliveries to customers in Europe and North America already in motion. In terms of lift capabilities, JCB assures customers that the electric excavator is equal in performance to a conventional diesel-powered 1.9-tonne vehicle.

The 19C-1E electric mini excavator features a runtime, that last for “the equivalent to a full day’s work”, depending on job type. Charging happens in two hours with a three-phase 380-420V charger or in eight hours on a 220-240V connection. A 12-hour charging option is also possible using a 110V onboard charger. The manufacturer also praised the three-battery system as being capable of retaining 85 per cent of its capacity even after 2,000 full charge and discharge cycles, which they estimate to around ten years of work.

JCB hopes to capitalise on urban markets, as well as a variety of other uses, according to their chief innovation officer Tim Burnhope. He said: “In urban environments, in particular, contractors are understandably very keen to operate zero-emissions equipment whenever possible, including outdoors.”