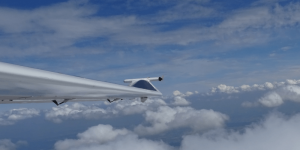 Electric wing end propulsion can simplify the control of aircraft in the future. At least this is the conclusion drawn after the first crewed test flights of the “icaré wtp” solar plane equipped with two electric wingtip propellers (wtp).

Since the beginning of 2018, the wing end drives and control system have been developed by the Institute of Aircraft Construction (IFB) and the Institute of Flight Mechanics and Flight Control (IFR) at the University of Stuttgart. They sit on removable pods weighing nine kilos at the wingtips and are equipped with their own batteries and sensors.

Although the performance is low compared to the main engine, the steering effect is enormous. With the propellers at the wingtips, the developers get an additional yaw control in addition to the classic rudder. In the prototype, it is possible to control both propellers manually via a new sidestick. The software can automatically add them to the rudder or aileron commands of the pilot.

The advantage of the wing final drives is that the tail units can be made smaller and thus lighter. The lower weight reduces fuel consumption and increases the range. According to the university, the aircraft are also becoming more agile. For smaller sports aircraft, there is also a safety aspect in that the two wing end propellers support the main engine.

In the future, it will also be possible for the pods to be rotatably mounted and thus control the vertical axis of the aircraft via up and down movements. This can relieve the pilot’s workload. In addition, the researchers see the potential that electrically powered propellers can reduce drag in commercial aviation. The propellers can reduce the edge vortices at the wingtips, which generate large wake vortices.

The solar aircraft icaré has been operating as a test aeroplane of the Faculty of Aerospace Engineering at the University of Stuttgart for more than 20 years. The wing end propulsion project is supported by the technical support of SFL GmbH and the test pilot Werner Scholz.