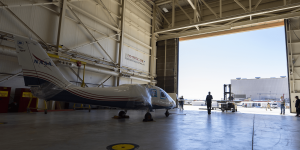 NASA presented an early version of its X-57 Maxwell all-electric passenger aircraft. The electric aircraft is based on the Tecnam P2006T twin-engine propeller aircraft, in which the combustion engines have been replaced by 14 electric motors. The first test flight is scheduled for the end of 2020.

“Our target right now is to fly this aeroplane in late 2020,” said Brent Cobleigh, project manager for NASA’s Armstrong Flight Research Center, in an interview with Reuters. The development of the X-57, however, is less aimed at a concrete production model, with the test aircraft being used to test standards and benchmarks for electric aircraft. “We’re focusing on things that can help the whole industry, not just one company,” says Cobleigh.

The machine now delivered to NASA is the so-called Mod II version – two more engine configurations are planned later. The Mod II machine will initially be used for ground testing. Taxi tests, i.e. driving tests on the ground, are then planned with the Mod III.

The later Mod IV version, with which the maiden flight is planned, will then have narrower and lighter wings, into which a total of 14 electric motors will be integrated. Six smaller motors will be mounted along the leading edge of each wing to improve lift during take-off and landing. The lift propellers will only be activated when required and will be retracted during the flight itself. At the ends of each wing, there is then a larger electric motor for propulsion during the flight at travel height.

In addition to the precise control of the many motors, the battery is one of the biggest challenges of the project. In order to be able to fly longer distances electrically in the future, the batteries onboard the aircraft must store significantly more energy without becoming heavier. For the moment, the aeroplane is only good for short-haul flights as an air-taxi or commuter plane for a small number of passengers.

Update 28 March 2020: Ahead of the planned test flights with the fourth version of the electric aircraft, the Mod IV, NASA published renderings showing what this would look like. The images below show the electric aircraft in three rendered pictures depicting cruise mode, take-off and standing at NASA’s Armstrong Flight Research Center in California.