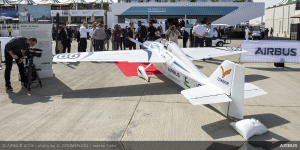 The Airbus-backed air racing tournament Air Race E unveiled the first racing e-plane at the Dubai Air Show. The ‘White Lightning’ is built by Condor Aviation based in the UK.

The all-electric aircraft will reach flight speeds of around 482 kilometres per hour (300 miles) on a tight 5-kilometre circuit (about 3 miles), just 10 metres above the ground.

This high-intensity racing requires the planes’ lithium batteries installed under the fuselage to provide power for no more than five minutes and around 10 minutes of reserve flying at reduced power. At that rate, you won’t see any endurance races. Air Race E boss Jeff Walkman instead describes the aeroplane and the tournament as a “testbed” that will foster electric flight as a whole.

The Air Race Events company aims to launch the Air Race E in 2020 with a series of international races. The series expects to name eight teams for its first race this week. An early contender to develop an e-plane prototype was the University of Nottingham as reported.