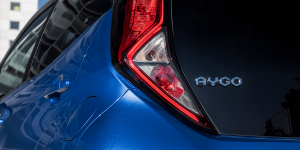 Toyota has decided that the Aygo small car will have a successor. According to Johan Van Zyl, CEO of Toyota Europe, a purely electric version may also be offered, but this decision is still pending.

Instead of going transitioning with an Aygo hybrid, at least the European boss of the Japanese company, Johan Van Zyl said Toyota is considering going straight to a fully electric version of the small car. “Some cities are applying zero-emissions zones, so we must think about the future and say, ‘how are we going to ensure that we have an electrified version of an A (minicar) – or sub-A-segment car that we’ll be able to utilise for these cities?” he told Automotive News Europe.

Despite the positive statements, nothing has been decided yet. It also remains to be seen whether the Aygo will only be offered as a BEV, whether there will be hybrid versions or even pure petrol versions. Automotive News Europe speculates that new petrol versions in the small car segment could be unprofitable. According to Ford’s estimates, the cost of NOx cleaning for petrol engines, which is necessary to reach the required Euro 6d-temp specifications, would cost around 2,000 euros per vehicle.

Van Zyl does not want to question the model in general despite the rising costs for exhaust gas purification in the price-sensitive small car segment. “The Aygo has been a very good product for us in terms of conquest and bringing younger people into our brand,” he explained. “We still see it as a good segment for us to be in.”

Smaller cars use less space and resources, two factors most criticised in the use of large vehicles in cities next to emissions. However, despite this, European automakers are increasingly abandoning this segment – ironically due to the cost of updating the lower-profit minicars to meet tighter European Union regulations requiring reductions in CO2 and NOx emissions, so they say. Asian carmakers, however, do not appear to have so much of a problem with these challenges. Toyota, Hyundai and Kia, have managed to keep up their commitment to this segment.

Also making the situation a little more relaxed for Toyota is that hybrid models already account for half of their sales across their European product range. This means that Toyota will be able to carry on selling fossil-fuelled Aygos without penalties after tighter CO2 regulations start in January.

The Aygo will be built together with the Peugeot 108 and Citroën C1 in a joint venture in Kolin, Czech Republic. Toyota still has to coordinate with the two French PSA brands, which are also development partners for the model. The Japanese company will probably not meet with much resistance with an electric version: Citroën boss Linda Jackson already announced BEV versions of the Citroën C1 as well as the sister models Peugeot 108 and Toyota Aygo in October 2018.

What remains to be seen is how these two PSA models will continue. Already in November 2018, the three partners agreed that Toyota would completely take over the factory, only founded in 2002, from 2021. Then Toyota would manufacture the third generation of the PSA derivatives of the small car trio quasi under licence – or PSA would go its way (in the meantime with Opel). Toyota could then utilise the plant’s capacity of 300,000 vehicles for other models and/or cars.

Toyota’s cooperation on light commercial vehicles, including the electric version of the Proace van, is not affected by the small cars.