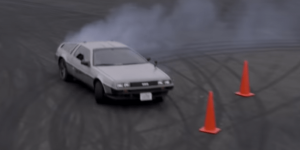 An engineering team from Stanford University has taken the iconic DeLorean, made famous in the 1985 film Back to the Future, and electrified it. More than just an electric car with an iconic exterior, this vehicle’s autonomous driving system enables it to “flawlessly drift through a racecourse.”

Called MARTY after Marty McFly in the film, this BEV has now been under development for the past four years. This period of intense development began with the car’s first drift (when a vehicle keeps moving forward while pointing sideways), after which its performance was perfected.

While the autonomous system is not really something we expect to see in use on public roads all too often, there is good sense behind the development: the electric DeLorean was built with the goal to develop automated cars that will be capable of handling emergency manoeuvres or slippery roads when covered with ice or snow.

As Chris Gerdes, lead project engineer, puts it: “We’d like to develop automated vehicles that can use all of the friction between the tire and the road to get the car out of harm’s way. We want the car to be able to avoid any accident that’s avoidable within the laws of physics.”