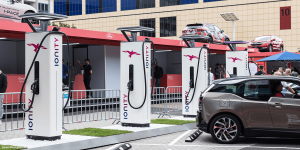 High power charging provider Ionity, the JV between BMW, Daimler, Ford, and the Volkswagen Group with Audi and Porsche has announced a new pricing structure across its European network. Based on kilowatt-hours rather than a base fee, the system is simple but has its details.

79 cent/kWh for everyone starting on 31 January – this is the new proposition Ionity brought forward in a press briefing today. It is a move away from the high power charging network’s previous offering, where customers paid eight euros for any charging session. This was during the “welcome phase,” specified Ionity CEO Michael Hajesch in a call with electrive and that phase is over. The network claims to have installed more than 200 charging stations with more than 860 charging points in 20 countries. That is half of the 400 HPC stations envisioned for completion by the end of 2020, then covering 24 countries.

With the scope of the network comes a broad range of clients and partners. Apart from its offering, Ionity also works with so-called Mobility Service Providers (MSP) that offer charging services to their customers. Those named in the press communication include the stakeholders of the joint venture such as Audi e-tron Charging Service, Mercedes.Me.Charge, BMW ChargeNow, Porsche Charging Service and Volkswagen WeCharge. Add to this other country-specific provider with some offering significantly lower pricing.

So while Ionity’s new pricing is indeed “transparent,” as CEO Hajesch says, it is pricey. At 79 ct/kWh, a charge of over 60 kWh, as is possible with the long-range versions of the Tesla Model 3, an Audi e-tron quattro, Porsche Taycan or in future also a VW ID.3 Pro S with a 77 kWh battery, costs over 47 euros. Depending on the consumption of the vehicle, this amount of electricity is sufficient for around 200 to 350 kilometres of range.

Then with bespoke packages on offer, the question remains how unifying the one-price-for-all policy can be. When asked by electrive, Ionity’s head of PR, Paul Entwistle stated: “We have a fixed B2B price – and this is agreed with the MSP in advance and then accepted. Then it is up to the MSP to decide which B2C price to carry over – we do not influence that.” He would not comment on the actual B2B price. One of our sources working for an MSP said that Ionity had informed them in advance on the kWh-pricing but that they do not know the exact B2B price yet. They have however reacted and announced individual prices as the update below shows.

Ionity does not provide figures on how many were charging processes run via Ionity itself and how many via MSP’s offerings. “For the customers of such services, there will be no interruption of offers,” said Hajesch. But: “The prerequisite is, of course, that MSP enters into a contractual relationship with us – which we assume they will.”

Clear is that customers who do not have a contract with an MSP will charge at 79 ct/kWh (gross price in country-specific currency) across the entire Ionity network. A feature, the HPC provider considers “an economically viable and transparent pricing structure across Europe”.

To put this into perspective, it serves to take a look at other providers. Tesla, for example, charges an average of £0.24 per kWh. The electric carmaker also operates a Tier 1 and Tier 2 system depending on charging speed available at the Supercharger (>60 kW tier 1; half the cost of tier 2 <60 kW).

For Ionity, however, such stages would make little sense as the provider promises to deliver the maximum charge power a car can take at any time. Also, tiered pricing depending on the carbon content of the electricity provided for example, is considered unnecessary as Ionity claims the sites will run on 100% renewable energy once the planned network has been fully developed.

Tesla also introduced the ‘idle fee’ that punishes anyone blocking a Supercharger once the EV is fully charged, given the station is busy. Ionity has no such plans as of yet, meaning the many electric vehicles coming out from the various stakeholders will have to share equally, no matter whether you drive the Porsche Taycan or VW ID.3 or even Kia’s electric car.

Allego is also building a network of charging stations with over 300 kW charging capacity. Since last summer, the Dutch company has been charging 59 cents per kWh for DC charging with 50 to 350 kW, i.e. 35.40 euros for our comparison charge. There are still suppliers such as Fastned or Innogy, who currently offer charging capacities between 150 and 175 kW, which in everyday use is still fully sufficient for models such as the Audi e-tron quattro or the Tesla Model 3. Innogy still charges a flat rate of 7.95 euros for a charging process, Fastned charges 0.59 euros per kWh, while a ‘Gold-Member’ still pays 0.35 euros (but with a monthly fee of 11.99 euros). Fastned already operates stations with up to 350 kW in the Netherlands and Belgium.

Update 17 January 2020: Shortly after Ionity released the new pricing model, JV partners published new conditions of their MSP service. At Daimler, customers of its charging service Mercedes me Charge will be able to charge with the ‘Ionity Package’ that allows EQC drivers to pay only 0.29 €/kWh at Ionity columns. In the first year, the package comes without a basic fee. What Mercedes will ask for the offer after this year is currently unclear. Daimler also did not want to name any prices for the package when asked, but asks for understanding “that we are currently not yet able to make any statement on future pricing”.

At Audi, too, charging at the Ionity charging stations is to become significantly cheaper. On the website for the e-tron charging service, Audi writes that the ‘preferential price’ is expected to be 0.33 euros/kWh from the beginning of 2020. According to information from electrive.net, the final tariff is to be 0.31 €/kWh – but only in the ‘Transit” tariff’ for frequent drivers. The reduced price will probably start at the beginning of February and remain “stable”, i.e. it will not be an Audi-owned introductory offer. However, there is one offer at the moment: Buyers of an Audi e-tron do not have to pay a basic fee for the ‘Transit’ for one year, after that the fee is 17.95 euros per month. For short-distance drivers, the e-tron charging service also offers the ‘City’ tariff for 4.95 euros per month, although it does not offer preferential prices for Ionity here.

Porsche also released an update and told us that drivers of the Taycan will charge at 33ct/kWh at Ionity’s high power charging stations.

The VW Charge&Fuel charging service and the BMW Charge Now service have not yet announced any preferential prices for the Ionity network.

Update 24 January 2020: In the meantime, Audi has confirmed the information from electrive.net about the e-tron charging service. Frequent drivers in the transit tariff (17.95 euros per month) receive a preferential price of 0.31 euros per kWh at ionity columns. Customers in the city tariff (4.95 Euro per month) must continue to pay the full price of 0.79 Euro per kWh at Ionity.

CTC of Canada to install fast-charging at 90 retail sites