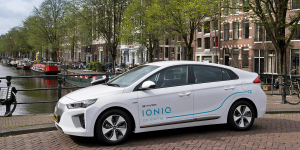 The Dutch government has now confirmed the planned purchase subsidies for privately used e-cars and has provided further details. Hybrid cars and vehicles above a list price of 45,000 euros will not be considered. However, secondhand electric used are eligible.

Those wanting to purchase an electric vehicle in the Netherlands will now be beckoned by a subsidy of 4,000 euros for the purchase of new electric cars with a list price of between 12,00 0 and 45,000 euros and a minimum range of 120 kilometres. The new subsidy rates include a bonus of 2,000 euros for used electric cars. The following applies to lease contracts: If the leasing contract is terminated within four years, the subsidy will also be discontinued and will be paid out in monthly instalments. Owners who buy another car within three years will have to repay part of the subsidy.

To prevent misuse, the subsidy is only available when buying or leasing through an approved dealer. Each person can also apply for a subsidy only once. Since the purchase prices for e-cars will decrease in the long run, the subsidy amount for new cars will also decrease in the coming years, while the 2,000 euros for used cars will remain at that level.

The governmental consultation phase for the subsidy program ran until the end of March. Electric cars purchased or privately leased will then be entitled to the subsidy, which can be applied for from 1 July onwards from the Netherlands Enterprise Agency (RVO).


The Netherlands is among the first countries in Europe to introduce a subsidy for the purchase or leasing of used electric cars. The crux of the matter is the condition of the battery, and measures addressing this can only be speculated about so far. Stientje Van Veldhoven, the Dutch Minister for the Environment and Housing, is considering introducing a battery check for used cars.

Currently, the battery in used cars is covered by a guarantee issued in the Netherlands by the BOVAG (BOnd Van Automobielhandelaren en Garagehouders) car association. However, in order to ensure greater safety, the association will now draw up such a uniform battery check.

“An electric car must be accessible to many more people than just business people,” Van Veldhoven comments on the political initiative. “There are more and more electric cars on the market and fortunately, they are becoming cheaper and cheaper. But a lot of people have a stomachache about the purchase price.” With the new regulation, the government wants to lower this threshold, both for people who want a new car and for those who choose a clean used car. “Especially for the latter category, it is also important that there is now more safety about the battery.”

The planned subsidy is part of what is called the “Klimaatakoord” (climate agreement), with which the Netherlands aims to reduce its CO2 emissions by 49 per cent by 2030 compared to 1990. Against this background, electric mobility is to be promoted with around 250 million euros by the end of 2025. The idea of boosting the purchase of electric cars via reduced-price loans was rejected in favour of the subsidy because the implementation was less complicated.

In the Netherlands, there have already been successful promotional measures. Last year, the Tesla Model 3 sold better than a VW Polo and is largely responsible for the fact that the Netherlands will have achieved an e-market share of 15.0 per cent in 2019 (after 6.0 per cent in 2018). One of the reasons for the popularity of the Tesla was tax breaks on leasing. With an entry-level price of 48,900 euros in the Netherlands, Model 3 remained just below the limit of 50,000 euros, above which a tax of 22 instead of four per cent must be paid on the leasing rate. However, this special leasing tax regulation is apparently to be abolished soon – which further increased the rush for Model 3s at the end of the year.

Update 05 June 2020: The above-mentioned purchase premium for privately used electric cars in the Netherlands is now official with its publication in the Government Gazette. The subsidy of 4,000 euros for the purchase of new electric cars and 2,000 euros for used electric vehicles can be applied for from 1 July and applies retroactively to purchases made after 4 June 2020. Subsidies are now officially available for privately used electric cars with a range of 120 kilometres or more and a list price between 12,000 and 45,000 euros. The programme runs until 2025, with a budget of 17.2 million euros for the current year, 10 million euros for new cars and the rest for used cars. The annual budgets for 2021 and subsequent years will be determined later.

Update 12 July 2020: There has been a great demand for the purchase premium – too great you could say. As the Dutch broadcaster NOS reports, the planned budget of ten million euros was allocated after only eight days after applications opened on 1 July. Individuals could apply for up to 4,000 euros for the purchase or leasing of an electric car; the subsidy was awarded on a “first come, first served” basis. In our calculations, the 10 millions euros then translated to funding for 2,500 electric cars using the 4k purchase premium.

According to NOS, applications that are still being submitted will be postponed until next year. The catch: it has not yet been decided how high the subsidy rates will be from 2021.

Those wanting a chance for funding this year may look into receiving subsidies for used electric cars. Of the 7.2 million euros budgeted here, only around 1.4 million euros have been granted.