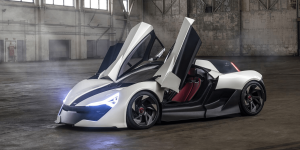 The British brand Apex Motors has introduced an all-electric sports car called AP-0. The EV is scheduled to go into production at the end of 2022, and Apex says prices will start at 150,000 pounds (before taxes). Down payments are already accepted.

Apex speaks of the AP-0 as an electric sports car inspired by racing and approved for road use. The rear-mounted electric motor produces 484 kW and accelerates the AP-0 from 0 to 100 km/h in 2.3 seconds. The top speed is stated as 306 kph. In contrast to many of the electric sports cars presented so far, such as the Pininfarina Battista, Lotus Evija or the Rimac C_Two, the AP-0 will only have one motor.

A battery pack with 90 kWh will provide energy storage, which should enable a WLTP range of 515 kilometres. Using CCS, it should be possible to charge the battery to 80 per cent in less than 15 minutes. If the 90 kWh energy content of the battery is the usable net value, this would correspond to an average charging capacity of 288 kW. A full charge with alternating current should take eight hours. If the 90 kWh is also considered as a basis here, this results in an AC charging capacity of exactly 11 kW.

Due to the extensive use of carbon fibres (including the safety cell for the occupants, some body parts and the rims), the AP-0 is expected to weigh only about 1.2 tons. Despite its focus on being a drivable sports car, the Apex should be able to drive semi-autonomously. For this purpose, the vehicle is to be equipped with its lidar sensor, among other things, which will be able to identify pedestrians, cyclists and other vehicles precisely. We are talking about an autonomous system according to level 3, which can later be extended with updates to a level 4 system.

But of course, the unusual design of the AP-0 is striking. The designers were able to dispense with large cooling openings because of the absence of a combustion engine, only as in other mid- or rear-engined sports cars there are air inlets in front of the rear wheels. Even more striking than the front with its angular lines is the rear. In addition to the continuous rear light strips that are now increasingly used, the AP-0 has additional vertical brake light. This extends from the shark fin to the diffuser.

Production in England is scheduled to start in the fourth quarter of 2022. The plant near Woking should be able to produce up to 500 AP-0s per year. The starting price of 150,000 pounds is currently around 165,000 euros, but here the usual local taxes are added.