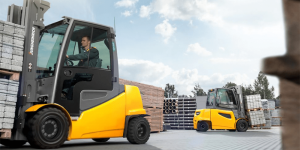 In the future, the German company Hagebau Logistik will rely entirely on rented electric forklifts from Jungheinrich. The logistics division of the Hagebau Group is thus decommissioning all its diesel forklifts and will only use electric vehicles in the future.

At Hagebau Logistik’s five sites in Germany (Westerkappeln, Neumünster, Herten, Schleinitz and Burgau) the material handling equipment of various makes used to date will be replaced by some 200 Jungheinrich forklifts. Which model or models are involved has not been revealed, nor has the costs of the conversion.

Jungheinrich says that the CO2 emissions of an electric forklift are some 42 per cent lower than those of an IC engine powered forklift of the same payload class. This would enable Hagebau to “significantly” reduce the carbon footprint of its forklift fleet. Costs are also to be reduced as a result of rental fleet management since this will allow avoiding over-capacities.

The decision to rely on a rental fleet was made after an analysis of the previous fleet. “In the process, trucks were identified that had previously been underutilised or inappropriately equipped,” says Jungheinrich. “The number of trucks in the core fleet was thus reduced by a total of 20 per cent. The provision of additional machines is planned for seasonal peaks in demand. In the event of unexpected additional demand, Jungheinrich will supply additional trucks within a very short time.” At the same time, it should also be possible to withdraw vehicles that are not required.