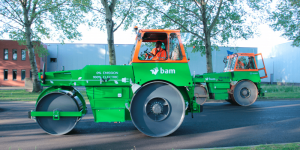 BAM Infra Nederland has developed the world’s first purely electric road roller and put it into operation. The heavy-duty machine was converted from diesel to an electric drive over a period of one and a half years.

The electric road roller from the Dutch construction company was used for the first time a few days ago as part of a project in Almere in the Netherlands. The company says a full battery charge keeps the electric roller in operation for eight hours, while recharging takes three to five hours.

When necessity is the mother of all invention: The idea to retrofit a roller was born through the lack of other market options. Since electric road rollers were not available, BAM Infra’s engineers converted an older diesel model that was having to be given a general overhaul at regular intervals. According to the Dutch company, road rollers are particularly suitable for electrification, because they do not require a long-range and, unlike other construction equipment, “only” need energy for driving and steering and not for energy-intensive heavy-duty tasks such as excavation work.

The converted roller now operates emission-free and is considerably quieter. The company calculates that the electric drive saves 73 litres of fuel and around 236 kilograms of CO2 per day. The successful conversion also encourages the Dutch company to set itself further goals: BAM Infra says that the electric roller is only the first step in the development of a completely emission-free road construction train. In addition to the electric drive, the company says that the use of hydrogen fuel cells could also be envisaged for this and other heavy-duty vehicles.