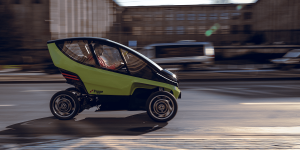 The light electric vehicle, designed for an exchangeable battery system, will compete in the L7E vehicle class, the category for light vehicles with a maximum unladen weight of 400 kilograms (without batteries) in electric vehicles.

Triggo specifies a range of up to 100 kilometres. According to the Polish company, five vehicles fit into a conventional parking lot when folded up, so to speak. A fully functional pre-production version of the vehicle is currently available, Triggo revealed in a press release via e-mail. Series production could start as early as 2021.

Onboard the 2.6-meter-long electric vehicle there are two electric motors with 10 kW each (however, due to the L7E class specifications the system power has been reduced to 15 kW) and a replaceable battery with 8 kWh. While the model itself weighs 400 kilograms (not including the 130-kilogram battery), the manufacturer estimates the maximum permitted weight at 750 kilograms.

The Polish vehicle is intended to stand out from the competition primarily through a variable width: In road mode, the light electric vehicle is 148 centimetres wide and can reach speeds of up to 90 km/h. Manoeuvring mode reduces the width to 86 centimetres, which shrinks the turning circle to 3.5 metres. This function for manoeuvring in traffic jams and on parking lots; accordingly, the speed is limited to 25 km/h. According to the manufacturer, for faster speeds and the ability to corner, it is crucial to give the vehicle the necessary stability through the wheels, which are further apart in road mode.

Visually, Triggo has opted for a fully glazed cab, among other things. Inside, the driver does not find a steering wheel, but a handlebar. The manufacturer estimates the cabin width at arm height at 75 centimetres. But the city zip-around is intended to make an impression above all with a hidden feature: a digital drive-by-wire control system. This should form the basis for the later addition of autonomous driving systems. According to Triggo, the model is already capable of driving in convoys (“platooning”).

Because of these features – digital control and battery replacement system – the model is ideally suited for the upcoming new urban mobility services, such as robo-taxi services. The Polish manufacturer says it is not only aiming to sell the vehicle but also to license it. Triggo claims to hold patents in the EU, USA, Japan, China and India.

“Both in Europe and the world, we are witnessing an increase in interest in and sales of electric cars, which are environmentally friendly. This, combined with Triggo’s competitive advantages, gives us great hopes for the success of the project, the commercialization of which we want to commence soon,” says Rafał Budweil, Chairman of the Board and founder of Triggo. He sees the Covid-19 pandemic as an opportunity: “Of course, we don’t know how the world economy will proceed, but after a pandemic, a lot can change in our daily lives. Among other things, the aversion of users to public transport as a place with a high risk of infection may increase. In turn, cities will promote smaller and more environmentally friendly means of transport to avoid paralysis. Such a solution may be Triggo, which currently has no competitors in the world who have similar possibilities.”.

But in fact, Triggo’s vehicle does have some competition, although it must be said, the Triggo’s scaleable width is indeed a unique selling point. In Germany, the ACM City was developed under the ICT-EM project Adaptive City Mobility 2 and is a city electric vehicle with a similar approach in several aspects: The ACM City was developed in connection with intelligent software and hardware system as well as a low-voltage battery exchange system and is a similar weight to the Triggo. Besides, Citroën recently presented the Ami, a vehicle in the L7E vehicle class Although the Ami does not have a battery-swapping system which is undoubtedly relevant with today’s infrastructure and energy challenges, the Ami only weighs 485 kilograms including the battery and is already ready for series production.