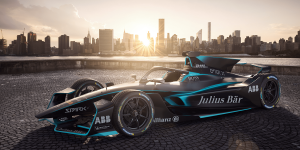 After the season was suspended in March, Formula E still needs one more race to be able to evaluate the season officially. Series founder Alejandro Agag had already announced weeks ago that Berlin could become the location for several laps. Now, these plans are becoming more concrete.

According to several media reports, the sixth season of the electric racing series is to be completed from 5 August to 12 – without spectators. In contrast to the usual city circuits, the track in Tempelhof has the advantage of not blocking traffic, as no roads have to be closed on the closed down airport. Besides, the number of people present can be controlled in the demarcated area.

There is also the possibility of a night race. Also, the track on the former airport apron is to be adapted overnight so that the individual competitions will take place on slightly different configurations. When this idea first came up a few weeks ago, the organisers were still opposed to it because of the expense involved.

A decision as to whether Berlin really will be the final venue for the 2019/2020 season with several races is to be taken by the Motorsport World Council on 19 June. Even if the multiple races in Tempelhof will get the go by the council, there is still the possibility that the city of Berlin will not host the Formula E season finale: Allegedly another race in Asia in September is also being discussed.

Ford presents new Escape plug-in hybrid for the US