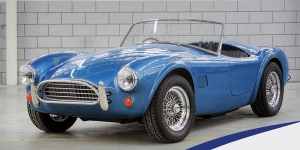 British specialist automobile manufacturer AC Cars is launching a limited edition run of zero-emission cars, the first-ever electric cars to bear the AC marque. This model is called the AC Cobra Series1 Electric and only 58 reservations will be taken.

The number of 58 reservations is not coincidental: it is now 58 years since the production of the first AC Cobra launched in 1962. The car with a Ford engine became somewhat of an icon and now AC Cars has released an official reborn version of the Cobra, albeit with a different powertrain.

The electric sportscar is powered by a front-loaded 54 kWh battery that gives an estimated range of 150 miles. The battery-electric car can accelerate from 0-62 miles (100 km/h) in 6.7 seconds and has a maximum speed of 120 mph (around 193 km/h). The design is still very much in line with the original Cobra, as is the interior, but according to AC Cars the steering, brakes, and other mechanicals have been upgraded to 2020 standards.