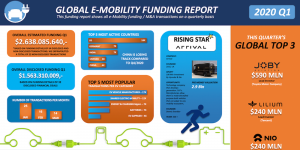 Dutch consultancy EVBoosters releases its funding report for global e-mobility investments in Q1/2020. While they saw the market slowing down as the first lockdowns set in, companies kept making deals in some unusual fields in particular.

E-mobility related start-ups disclosed financing deals amounting to 1.56 billion dollars throughout the first quarter of this year. Although a significant number, the company’s Global E-Mobility Funding report shows disclosed funding was down 18% compared to the same quarter last year.

The average deal size was lower in Q1 (-21% YoY), driven by a decrease in the average value won in the top 3 deals companies disclosed. At the same time, the total number of said identified transactions was up 86%. The increase highlights the strong financing appetite for the sector even as it was entering a global shutdown although gradually. 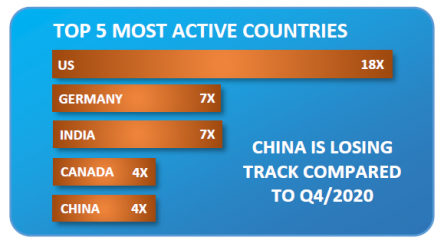 The United States remained the single strongest country for funding, esp. in the value of deals. However, Europe matched the US in terms of deal count. China lost momentum compared to Q4/2019 and was in fifth place, also due to being hit hard and early by the Coronavirus crisis before Europe had to react as well.

Analysts estimate a total of $2.6 billion in investments
Electric vehicles, in the broader sense, so including scooters, bikes, cars and planes, are still the main recipient of funding, both in disclosed amounts ($1.26 billion) as in deal count (17). EVBoosters managed to get details on 32 of the total 54 transactions.

However, the analysts estimate that actual deals weighed in at over $2.6 billion in Q1/2020 rather than the disclosed $1.56 billion. Company founder Paul Jan Jacobs explains they extrapolated the average from the disclosed funding details to include companies that had not disclosed details. “We estimate that the overall worth of all capital injections together can be valued at ca. $2.6 billion for the first quarter of 2020,” Jacobs said.

Notably, the top two deals this quarter were Joby and Lilium, both in the urban air space as manufacturers. Toyota led the financing round at Joby, spending $394 million out of the total $590 in funding the company received to launch its air taxi service sooner. Lilium received about half the amount with 240 million dollars in a round led by China’s Tencent. While Nio rounded out the top three dealmakers in Q1/2020, the aspiring electric carmaker experienced substantial financial difficulties due to the virus crisis in China at the end of the quarter as reported. At the same time, a new strategy to tie the company’s survival to the provincial government in Hefei is proving successful in this current quarter Q2.

Most active investors: Toyota, Tencent and ABB
Large corporates again dominated the investor landscape in early 2020 with Toyota investing in UK-based bus and van company Arrival as well as in Joby as mentioned above. Also Tencent put capital in both Lilium and Nio.
Swiss ABB expanded its portfolio in charging services through early-stage investments in numocity and In-Charge Energy. French VC Demeter was a notable financial investor with two deals: CityScoot and existing portfolio company NAWA Technologies. 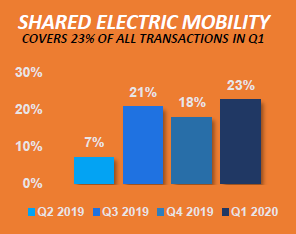 Ridesharing and micromobility service providers have been steadily increasing their share of deals per quarter, reaching a high of 23% of all disclosed deals in Q1 2020 and coming in second place behind electric vehicle manufacturers. In the EVBoosters report, electric fleets classify as a separate category, but when added to shared electric mobility, it would be the largest sector in terms of deal count.

Impact of COVID-19
As a large part of the world moved into lockdown towards the end of Q1, there was a sequential monthly slowdown in transactions during the quarter, even though overall, volumes were up compared with last year. EVBoosters expect that Q2 will show a more pronounced effect of the different lockdowns throughout the world on announced deals.

Source: The ‘Global e-Mobility Funding Report’ is an initiative of EVBoosters and supported by Venture IQ, a data-driven technology company. You may download the report in exchange for contact details via the consultancy’s ‘EV Treasury Room’, world’s largest database for EV Market ReportsEVBoosters will release the Q2/2020 report in early September via electrive.com.