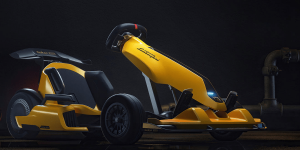 Segway-Ninebot has developed an electric go-kart together with Lamborghini. The Ninebot GoKart Pro in the ‘Lamborghini Edition’ can reach speeds of up to 40 kph and is distributed through electronics manufacturer Xiaomi.

The sales cooperation has come about for Xiaomi’s ten-year jubilee and we learnt they are the first distributor to debut the product. Xiaomi is also a minority shareholder of Segway-Ninebot.

The latter has turned to Lamborghini for inspiration for the Ninebot GoKart. Thanks to the 432 Wh battery, a single charge claims enough range to go 62 laps of a 400-meter circuit or a total range of almost 25 kilometres.

The distributor was careful to inform, that the Gokart doesn’t produce “Lamborghini “ sound. It only simulates race car engines.