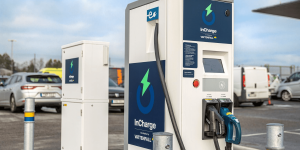 Vattenfall has won a major tender for new charging infrastructure in the Netherlands. Up to 8,000 new charging points will be built in the provinces of North Brabant and Limburg by 2024.

A new feature is a procedure for site selection: Vattenfall will be investigating with the participating municipalities “in which busy places it is worth setting up a charging plaza”. Under the agreement, however, the energy company will also make charging stations available on request from private individuals. “If someone buys an electric car and does not have their own driveway, they can request a charging station nearby,” the Swedish company said in their statement.

The parties – i.e. Vattenfall and the municipalities – apparently want to work on a “proactive installation” so that drivers already have a charging station nearby before they pick up their electric car from the dealer. However, the brief notification does not indicate the conditions under which such charging points are to be set up at the request of private customers and what the application procedure will look like.

Vattenfall intends to use the SparkCity model for the proactive installation. This model was developed in cooperation with the Technical University of Eindhoven and the Hogeschool van Amsterdam to determine the charging requirements per area within a radius of 250 meters.

“In this way, we ensure that access to charging infrastructure is not an obstacle to electric driving, and speed up the transition,” says Tomas Björnsson, Head of Electromobility at Vattenfall. Vattenfall’s charging network already comprises 85,000 charging points throughout Europe, many of them in Scandinavia.

In the tender, there is also “room for innovation at the charging stations”. Vattenfall cites as an example the intelligent charging with “Flexpower” – a method with which Vattenfall can react to additional solar or wind power according to its own specifications.

The model will be the Alfen Twin, a column with two charging points designed for public and semi-public charging. The columns are manufactured in the Netherlands by Alfen themselves.