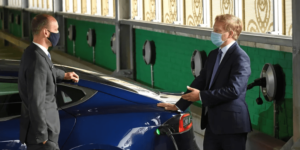 Govia Thameslink Railway (GTR) that is among the UK’s biggest rail franchises opened a large charging hub at Hatfield station, north of London. The site features a total of 27 charging points.

Secretary of State Grant Shapps attended the opening that GTR considers a “milestone” in station improvements across the network. The charging stations are part of a GTR programme, which encompasses more than 230 stations.

Tom Moran, Managing Director for Thameslink and Great Northern, explained: “We have over 1,000 improvement projects happening across our network, and many will help improve the sustainability of our stations, especially as our local communities seek out options for the greenest forms of travel.”

Hatfield’s new hub has been installed in partnership with Pod Point. They delivered the 7kW charge points. The company utilised its Array System for the installation which reduces the requirement on standing supply by 66 per cent, according to Pod Point. It also allows for easier addition of further charge points at a site that Pod Point understands to be the largest EV charging hub in UK Rail. That is by one station as Worcestershire Parkway station saw 26 chargers arrive today supplied to GTR competitor GWR.

GTR says the Hatfield stop that belongs to the Great Northern and Thameslink network, will see a 150 per cent increase in public EV charging opportunities in the Welwyn Hatfield district and that the installation follows demands by local groups.

Another dozen new charging points have also been installed at Haywards Heath train station. The operator chose the locations as a result of heat-maps, which revealed EV ownership and sales’ hot spots’ around the UK.

The new charging points are in addition to the existing 114 in place across the GTR network, which have all undergone improvements as part of the project.

Founder and CEO of Pod Point, Erik Fairbairn called the GTR EV charging hubs at Hatfield and Haywards Heath a “blueprint for EV charging across the rail industry”.

GTR passengers and the surrounding communities can access information on station improvements on websites of their respective regional rail service.