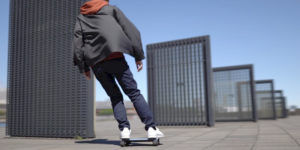 The Japanese company Cocoa Motors finally started the worldwide sale of what they call the Walkcar in August after they introduced the skateboard-like concept in 2015. The LEV weighs only 2.9 kilos and is the size of a 13-inch laptop.

Compared to the 2015 version, the production LEV should be much improved. Cocoa Motors call the hoverboard-inspired piece a “car in the bag”, and the genuinely light weight of fewer than three kilos justifies carrying it around enough.

The micromobility boom potentially played some suppliers into Cocoa’s hands as well. Indeed the website states that “a special has been developed after five years of pursuit”. The in-wheel motor body is wholly integrated through welding that reduced the space for screws and maximized the coil space. Cocoa says the Walkcar drives at a top speed of 16 kph and manages slopes of up to 10 degrees. And, it looks smooth with riders shifting weight to take the curves.

Overall, the whole idea of a laptop-sized mobility device is well, handy. Yet, the Walkcar is not a cheap one at that – 1,980 dollars is definitely MacBook Pro territory. Plus, we’d love a new name to easily roll off our tongue.