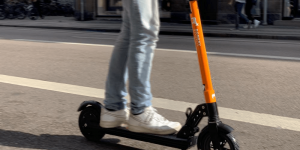 An 50 year-old man was caught riding an electric scooter on the M3 motorway in Hampshire. His kickscooter was seized and he was further punished with six points on his driving license. And here we thought, e-scooters were a territorial problem on sidewalks.

The local police took to Twitter to try to explain the rules a bit more clearly to the public: “Just a reminder that they are illegal to use on public roads and footpaths unless rented as part of the trial zones.” The UK is currently rolling out electric scooter testing for both kick scooters and light electric mopeds.