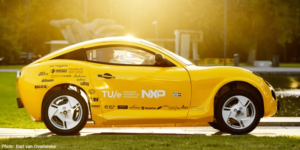 The Ecomotive team from TU Eindhoven presents a prototype of its Luca electric car in the form of renderings. In the next step, the developers intend to obtain road approval for the two-seater compact sports car, which is largely made of recycled material.

The students are using a composite material made of flax and recycled PET plastic as well as recycled aluminum for Luca. The TU Eindhoven team wants to use the battery-electric vehicle to demonstrate that electric cars can not only become cheaper but “that waste is a valuable material – even in complex applications such as a car,” says team member Matthijs van Wijk.

It was already known that the two-seater is driven by two-wheel hub motors that together produce 15 kW. According to new information from the development team, this enables it to reach a top speed of 90 km/h. The radius of action is 220 kilometres. According to the Ecomotive team, the battery weighs only 60 kilograms, and there is still no information on capacity or the cell chemistry used. When the renderings were presented at the beginning of the year, they said that the small battery would consist of six modules that can be exchanged for full ones, but also for more modern batteries as soon as the technology is available.

Without batteries, the Luca weighs only 360 kilograms. The chassis consists of a unique sandwich plate, which was developed in cooperation with several companies. In addition to the bodywork, the windows and interior are often made of recycled materials. For example, the two seats contain coconut and horsehair. Inside the Luca contains residual materials from its own production process, according to an accompanying note: “The exterior is made of flax fibres combined with plastic which was fished from the ocean”. Furthermore, the yellow colour of Luca is not a paint-job, but coloured foil. It can be removed without residue, which makes the final recycling process much easier, they say.