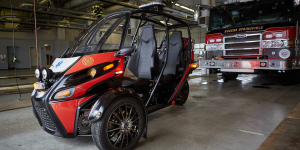 Mark Frohnmayer, the founder of Arcimoto, a US American manufacturer of three-wheeled electric vehicles, claims in a recently published interview that Tesla CEO Elon Musk drove one of his cars into a wall in the fall of 2019. Musk were foolhardy but not injured.

This incident, which has now become public, puts a Tweet from late September 2020 in a new light: When a Twitter user asked Musk for help with some projects with a video from Arcimoto consultant Sandy Munro, Musk responded succinctly: “Can’t support three-wheeled vehicles. Not safe enough.”