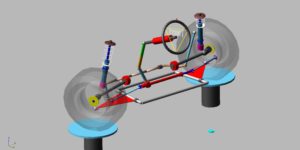 Sono Motors has announced its collaboration with Team Rosberg Engineering (TRE) in chassis development. The partnership covers the development, simulation and production of a suspension and chassis system.

According to the Munich-based company, the chassis developed within the scope of the cooperation will be installed and tested in a new prototype of the Sion electric car. From this, the partners will derive the production chassis. According to Sono, chassis and steering are a central aspect of every vehicle.

First comes a subframe for the chassis. This not only absorbs the forces from the suspension system but also takes on tasks relating to vehicle safety. It must be stable in a frontal crash, but must not become too large due to the specified dimensions of the Sion.

TRE was founded by Finnish Formula 1 world champion Keke Rosberg and, in addition to the development of motorsport components, is also active in the field of production vehicles. Keke’s son Nico Rosberg, who is also a Formula 1 world champion and now primarily active as an investor in the field of green technologies, also has a stake in TRE. “As a sustainability entrepreneur, it is a particular concern of mine to contribute our expertise to the development of Sono Motors’ Sion and to further develop the future of alternative mobility concepts,” says Nico Rosberg.

“TRE is a leader in chassis development and brings the specialized knowledge of racing engineers to the development of passenger cars,” says Jona Christians, founder and CEO of Sono Motors. “Furthermore, with a German supplier, we have short delivery distances and short delivery times”.

According to Sono, the prototype parts such as the subframe, wheel carrier and stabiliser should already largely correspond to the later series parts in terms of their properties through the use of “efficient manufacturing processes”. Sono Motors hopes that the prototype, which will be assembled in Roding by the end of the year, will not only allow functional tests to be carried out, but that it will also allow the tuning of the chassis to begin.

Daimler board approves €70 billion in investment