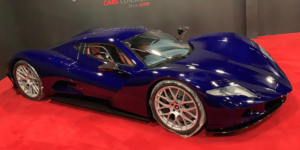 The Japanese conglomerate Aspark has started production of a small series of 50 examples of the Owl sports car. The car is expected to go from 0 to 100 kph in under two seconds. The model, which is available for a price of three million euros each, is probably not yet sold out.

Aspark unveiled its Owl electric sports car at the IAA 2017. Now the car is available: production has started with a limited series of 50 cars, 20 of which will be sold in Europe, 20 in the Middle East or Asia and ten in North America; at a unit price of around 3 million euros.

As is usually the case with many expensive collector cars, however, the Owl is unlikely to sell out before production begins. At the very least, the company is sharpening up its sales efforts. “After the initial period of direct sales, Aspark now is ready to provide even more flexible services to customers through its network of prestigious dealers,” the release says. “Some more dealers will be probably added in the next weeks, mainly in Europe and in the Middle East.”

According to plans announced in 2017, production was to start as early as 2019, but now it’s the turn of 2020/2021. The car’s extreme acceleration is said to be achieved not only in simulations: Allegedly, a test of a prototype in Italy with Michelin production tires measured a value of just 1.72 seconds to 60 miles per hour (96.5 kph), although this was after a rolling start, not from a standstill.

In return, the power output of the carbon-fiber sports car was drastically increased. Instead of the originally stated 320 kW, 1,480 kW is now specified. The range is said to be over 450 kilometers, provided the driver does not call up the extreme power. However, acceleration from 0 to 300 kph in just 10.4 seconds is likely to increase consumption significantly.

Norway: with stats from December, stronger EV sales in 2020