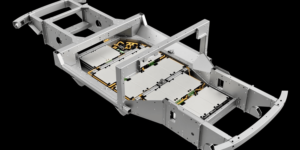 UK-based Watt Electric Vehicle Company has designed a novel platform designed for niche vehicle manufacturers. Called PACES, for ‘Passenger And Commercial EV Skateboard’, it is flexible, scalable, lightweight and cost-effective, according to Watt.

Made from aluminium, Watt Electric Vehicle Company claims the PACES platform can be applied to almost any size or shape of EV and name sports cars to buses plus various motor layouts such as FWD, RWD and AWD layouts.

This sounds almost too good to be true, but Watt also notes that they have already managed compliance with all ISO regulations and European Small Series Type Approval crash standards.

The key to the extreme scalability is in an innovation that Watt calls FlexTech. PACES is composed of lightweight extrusions. The company describes how these laser-cut pieces interlock and bond together to form the PACES structure rather than, for example, using more expensive corner-castings. Watt says they can deliver within 1mm of variability across the whole platform and that it requires little upfront investment in tooling or post-assembly machining, all cutting manufacturing cost.

They also already have the first production car in the pipeline to use the PACES platform. Inspired by the 1955 Porsche 356a, the incoming two-seat fixed head electric sports car, will feature near 50:50 weight distribution, a curb weight of less than 1,000kg and a “communicative chassis,” says Watt. This apparently means “carefully-honed ride, handling and steering characteristics.” The rear-mounted electric motor will be available in two power outputs, with a 40 kWh battery, giving WLTP range of 230 miles. The company wants to reveal more the Coupe in the coming weeks.

Technical development was done with partners from the UK such as Stalcom Automotive Technologies, responsible for FlexTech, or Equipmake who took on the powertrain and battery systems with Potenza Technology signing on for BMS and control systems.

Neil Yates, founder and owner, said they had undergone development over the last and that they were now market-ready. He also invited interested manufacturers to get in touch to discuss their requirements.