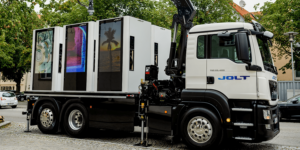 The German-Irish charging infrastructure company Jolt Energy is expanding into the US and has announced a partnership with former New York Governor George E. Pataki and his Pataki Cahill Group. Jolt wants to establish fast-charging in inner cities in the USA

Pataki Cahill Group specialises in the development of energy projects and will advise and support Jolt Energy during its market expansion in the United States. The goal is to establish fast-charging of electric vehicles in US cities. Jolt will primarily operate its own urban high-capacity charging network, but will also market its Merlin family of chargers to third-party providers. Jolt is also working with financial, automotive and event management organisations to supply the market with charger rentals.

The MerlinOne charging station was created in collaboration with the company ADS-TEC and has integrated storage of 200 kWh. It was specially developed for scenarios in which the existing power grid makes it difficult to provide high-power charging. The mobile DC charging station works in “island mode” as well as with a grid connection. In ‘island mode’, the amount of energy available is obviously limited if not connected to some kind of supply.

The charging station is 2.30 metres high, 1.20 metres wide and 1.10 metres deep. Jolt Energy describes the MerlinOne as a particularly flexible solution that is “essentially large power packs” that can be installed without construction work.

When the MerlinOne mobile DC charging station was revealed in October last year, Jolt explained to our German colleagues at elective.net that a mains connection is required for the other two operating modes of the MerlinOne. When connected to the low voltage, the battery storage unit serves as the basis for fast charging. It is continuously charged via the mains and delivers the high charging power in a very short time when needed. This enables high-performance charging despite low voltage and without grid expansion. If the connection is made to medium voltage, the stations can be used directly as DC chargers as a third option. The charging capacity is initially 160 kW and will later be expanded to 320 kW.

In December last year, Jolt Energy Group, which is based in Munich and Dublin, announced an agreement with EG Group to install MerlinOne fast-charging stations at 40 Esso filling stations in southern Germany this year. In this application, when the storage tank is 80 per cent empty, the MerlinOne is exchanged for a fully charged one. To transport the mobile charging stations, Jolt Energy has developed a special truck called MerlinTruck with the Swedish company Hiab, including automated crane operation, which the company says limits the exchange process to five minutes.

Now the company is moving into the US market with ambitious plans and a clear market case. Jolt CEO Maurice Neligan said of the move: “We’re very excited and honoured to work with Governor Pataki and his team to develop fast-charging solutions for US inner cities.” He explained: “We’re just at the beginning of an e-mobility revolution led by Tesla’s pioneering spirit.” He said that Jolt is “committed to delivering solutions for this critical inner-city high power charging challenge.”