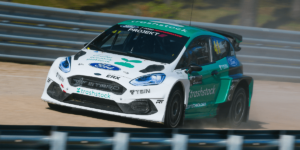 The 2021 Motorsport UK British Rallycross Championship 5 Nations Trophy will now include both electric and internal combustion engine vehicles in its headlining Supercar class.

Motorsport UK is currently in the process of approving the inclusion of electric vehicles in the regulations which will give the green light to competitors looking to join with EVs.

Great Britain is by no means the first to get off the starting blocks with the inclusion of electric cars in rallycross championships, with Austria, Norway, Germany, Hungary and Italy have all already started this transition.

The UK transition has been made possible with the use of the STARD ERX powertrain, which was used in the World RX Project E Championship. The performance of the STARD ERX is on a par with front-running engined rivals with the four-wheel-drive 450 kW power delivering 1000 Nm torque, equivalent to 600 bhp.

The STARD’s electric rallycross powertrain concept has been under development for almost a decade and was used in the World Rallycross Championship’s Projekt E electric support category last year. In Hungary the same year, a STARD-powered Ford Fiesta claimed the first victory for an electric rallycross car at a stand-alone event.

Championship coordinator Hannah Rynston said: “To be the first in the UK to combine the two types of power is very exciting and we’re very much hoping to have a few STARD powertrain-equipped cars on the Lydden grid in May.”

Michael Sakowicz, CEO of STARD explained that: “The relatively short runs and rallycross scheduling lend themselves very nicely to charging requirements with around 15 laps possible on a single charge.” He added, “We believe that the ERX cars will be attractive to drivers looking for the next era of competition. ERX is the most cost-efficient high-level electric racing concept on the market and at the moment the only one available for customer motorsport teams to purchase worldwide.” Surprisingly, he revealed that not only does the ERX Supercar have a significantly lower running cost of around 60% less than conventional ICE cars, it also has a cheaper purchase price than a comparable ICE Supercar.

The current plan is that Five Nations BRX should begin on 29 May at Kent’s Lydden Hill circuit, before visiting Ireland’s Mondello Park, Pembrey in Wales and Knockhill in Scotland, and then finishing in December with a debut appearance at Belgium’s Spa Francorchamps.