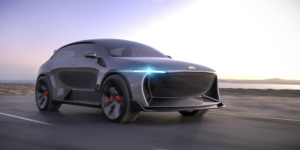 The Californian start-up Humble Motors has presented the concept of an electric SUV that is equipped with solar cells on a 7.5 square metre surface. The Humble One is scheduled to go into production in 2024 and be delivered from 2025. The company is already taking reservations.

With the installed solar cells, lightweight construction technology and a particularly aerodynamic shape, Humble Motors wants to make its electric SUV a particularly efficient vehicle. The Humble One is said to have a power output of 761 kW and a range of 500 miles (about 800 kilometres). According to the company’s website, these 500 miles are covered by the battery. The solar cells are said to be able to generate energy for an additional range of ten to 60 miles (16 to 97 kilometres) per day.

Several pictures published by the start-up show the Humble One as a four-door SUV with five seats. The exterior looks very streamlined, and the developer gives the drag coefficient as 0.25 cW, which is a very low value for an SUV. To compare, the Tesla Model 3 comes in at 0.23 as a sedan.

The “highly efficient, patent-pending solar cells” are to cover around 7.5 square metres of the vehicle’s surface, specifically the roof and side windows, the doors and “fold-out wings”. The potential energy that can be generated depends on “where you live”, according to Humble Motors. On its website, the company states that there are many regions in the world where charging infrastructure coverage is poor. “You could drive without the need for charge stations with solar-powered electric vehicles. Grid-independent vehicles are the future,” it continues.

However, Humble Motors also has a foot in the present and is relying on a large battery and all the classic charging technology for the electric SUV. The Humble One will be able to charge at household sockets and charging stations and will be fast-charging capable, among other things. The Californian company put the base price at 109,000 US dollars. Pre-orders are possible with a deposit of 300 dollars, which is fully refundable according to the website. According to its own information, Humble Motors already has pre-orders worth 20 million dollars. Assuming that a down payment of 300 euros has always been made, this means that almost 67,000 copies have probably been pre-ordered.

According to Humble founder Dima Steesy, the business strategy focuses on designing, building and selling electric vehicles with solar roofs: “We think solar is the future of mobility and that solar-powered electric vehicles are the clear next step to tackling carbon neutrality in the transportation ecosystem.” Humble’s workforce is made up of physicists, engineers and designers, among others, who have previously worked at car manufacturers such as Ferrari, Piaggio and Ford.