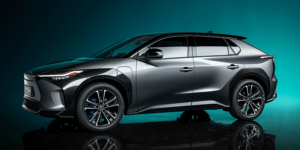 Toyota presented the Toyota bZ4X Concept at Auto Shanghai, providing a preview of the Japanese brand’s first battery-electric vehicle. The study, developed by Toyota together with Subaru, is expected to go into series production in mid-2022.

The all-wheel-drive mid-size SUV is built on the e-TNGA modular platform developed specifically for battery-electric vehicles and is the first model from the new “bZ” portfolio, this abbreviation standing for “beyond Zero”. Toyota has not yet disclosed technical details about the bZ4X Concept’s powertrain.

Toyota attributes great importance to the concept car: “The all-wheel-drive mid-size SUV marks the transformation from a pure car manufacturer to a holistic mobility provider,” the statement reads. “Our customers value time spent together with family and friends. If they want to enjoy such times, the Toyota bZ4X Concept can serve as a ‘hub’ for that,” explains chief engineer Koji Toyoshima.

Since the bZ4X is not the electric version of a combustion engine, it is given an independent look. Instead of the radiator grille, the various sensors, lights and aero elements are supposed to form a “striking” visual shape that conveys strength and presence. Toyota does talk about the bZ4X Concept being based on the e-TNGA platform developed specifically for battery-electric cars, which is supposed to allow for a “long wheelbase with short overhangs”. However, in the published pictures of the concept, the front looks rather long and the proportions rather conventional, for instance, compared to a Hyundai Ioniq 5 with a smooth three-metre wheelbase. Unfortunately, Toyota does not provide any figures to compare the bZ4X Concept with other electric SUVs.

The only information about the drive system: as the ‘X’ in the name suggests, the concept car is an all-wheel-drive vehicle with electric motors on the front and rear axles. However, Toyota does not reveal which type of electric motor is involved. The all-wheel-drive is said to be based on “Subaru’s many years of expertise in this field”. The chassis is designed in such a way that the Toyota bZ4X Concept “cuts a fine figure on and off paved roads”. A steer-by-wire steering system is designed to increase control and comfort.

The steering wheel itself is similar to the ‘yoke’ design of the Tesla Model S Refresh, as it does not have a steering wheel rim. At the front, a wide centre console separates the areas between the driver and the front passenger; in addition to several storage compartments, it also houses the rotary control for the driving positions and the climate control. The centre console flows into a large touchscreen as the central infotainment unit. The gimbal tunnel of an internal combustion SUV with an all-wheel-drive is no longer present in the electric platform.

By 2025, the Japanese car company plans to introduce a total of 15 battery-electric vehicles worldwide, including seven “bZ” models. By 2025, Toyota’s electrified model range will grow to more than 70 vehicles worldwide, including at least 15 pure electric cars. In Europe, Toyota says this will lead to a powertrain mix of more than 70 per cent hybrids, around 10 per cent plug-in hybrids and just over 10 per cent zero-emission models, including both battery-electric and fuel cell cars, by 2025.