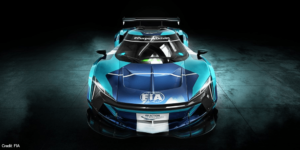 The FIA has unveiled plans for the introduction of an all-electric GT category that would offer significantly more freedom for technical development than previous electric racing series. However, it is still only a concept and no date has been set for its launch.

For example, the battery development is to be largely optional – in Formula E, which is also sanctioned by the FIA, the entire battery is a standard part for cost reasons. In the GT series, only the battery cells are to be supplied as a standard component by Saft, a subsidiary of the mineral oil company Total. Battery packs of up to 87 kWh are to be assembled from the unit cells. However, there is not much scope to build a more efficient vehicle with a lighter battery, as the weight of the vehicles is to be between 1,490 and 1,530 kilograms.

A fast-charging system with an output of up to 700 kilowatts is to be used to recharge the batteries to up to 60 per cent of their capacity within a few minutes during pit stops.

The maximum drive power is to be capped at 430 kW. The manufacturers are to be able to choose between rear-wheel-drive with two motors or all-wheel drive with four motors. Torque vectoring, which is banned in Formula E for cost reasons and allows power to be delivered specifically to individual wheels, is expressly permitted in the Electric GT.

Other points of the drive system, on the other hand, are to be freely selectable – such as rear-wheel drive or all-wheel drive. Torque vectoring is also to be permitted. Thus, from only one central motor on the rear axle to four motors, all variants would be possible – renderings published by the FIA show exactly this configuration with one motor per wheel.

It will be up to the car manufacturers whether they develop their own production models based on this concept (as has often happened in the past in the combustion world) or whether they install an E-drive in an already approved GT3 race car instead of the combustion engine. Speaking of GT3, the “Electric GT” cars are expected to be roughly on the performance level of today’s GT3 race cars. The electric racers are supposed to be a little faster when accelerating or doing a lap in qualifying, but probably a little slower in the race. Unlike Formula E with its street circuits, the Electric GT races are to be held on permanent race tracks.

The FIA hopes that the GT racing series will become more relevant for the manufacturers with technical freedoms. “The main technical challenges are battery development, battery integration in the cars and fast charging technology,” says FIA technical chief Xavier Mestelan Pinon. “This is crucial to the manufacturers who want to develop road-relevant technology rather than relying on standard components.”

FIA President Jean Todt adds that the federation’s vision is “to make motorsport a laboratory for sustainable mobility”. However, the FIA does not yet specify what the racing format of the Electric GT will look like and when the first races are to take place. However, some manufacturers are very interested in the concept that has been developed over the past year and a half.