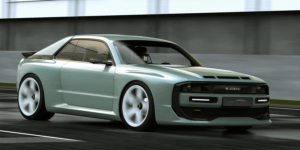 The German company E-Legend is presenting the EL1, an all-electric sports car with a retro look that takes visual cues from the Audi Sport Quattro. The first prototype of the EL1 is scheduled for completion in 2022, after which a small series of 30 units is then planned.

The designs for the EL1 were created at E-Legend in Beilngries, north of Ingolstadt, while prototype and small-series specialists Roding from the town of the same name, northeast of Regensburg, will be responsible for the production of the limited series of 30 units. All cars will be hand-built and both the carbon monocoque and the assembly will be completed in Bavaria. The first dozen EL1s are to be delivered at the end of 2023, the other 18 in 2024. Cost per vehicle: from 1.06 million euros.

In return, you get a car with the look of a rally legend from the 1980s, but with the DNA of a modern sports car. The technical key data: 600 kW four-wheel drive power, a range of 400 kilometres thanks to a 90 kWh battery installed in the centre tunnel and behind the seats, fast-charging capability of up to 150 kW, a top speed of 255 km/h and a 2.8-second sprint from standstill to 100 km/h. In addition, there is an 800-volt electrical system, a kerb weight of only 1,680 kilograms and 19-inch wheels at the front and 20-inch wheels at the rear.

The EL1, meanwhile, is only supposed to be the prelude. E-Legend founder Marcus Holzinger, who previously worked as a designer for VW, among others, also announces an EL2 and an EL3 for a later date, which also have rally legends from the 1980s as their source of inspiration and are to be built in a quantity of 30 vehicles each. According to “Auto, Motor, Sport”, the EL2 will be inspired by the Lancia Stratos HF Stradale.