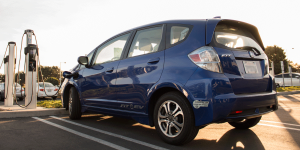 Two Democratic US congressmen have introduced a bill that would give tax rebates of up to 2,500 US dollars to buyers of used electric cars. In full. The US tax credit of $7,500 for electric car purchases so far only applies to new cars.

The Affordable EVs for Working Families Act would apply to electric cars that are at least two years old and cost less than $25,000. Senator Dianne Feinstein and Jimmy Gomez Käufer, a member of the House of Representatives, envisage that the premium will only be granted in full to individuals with an adjusted gross income of up to $75,000 for individuals or jointly assessed up to $150,000. For all those above these marks, the premium would be paid at a gradually reduced rate.

According to the initiators of the bill, both of whom are based in California, it would help low- and middle-income households to buy electric vehicles. Similar rebate programmes are already said to exist from the state level in California, Oregon, Connecticut and Pennsylvania.

“We know that passenger vehicles account for a huge amount of the carbon emissions that contribute to global warming. California has already taken the lead in shifting away from fossil fuels and the internal combustion engine; now it’s time for the nation to follow,” Feinstein expresses. “This bill would help make electric cars affordable to a larger group of people and move us closer to a point where high-pollution gas-powered cars are off the roads. We need more legislation like this to incentivize behaviour that will reduce global warming, and I’m proud to sponsor this bill.”

What is clear, meanwhile, is that the bill is still in the very early stages of the legislative process and must first pass through committees and then both chambers of Congress. The Affordable EVs for Working Families Act is one of several Democrat bills that are expected to have a major impact on the development of electric mobility in the US.

US DoE to invest in emissions reduction