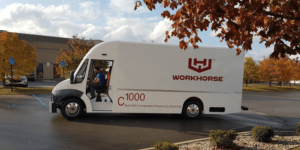 The US American electric vehicle manufacturer Workhorse has replaced President and CEO Duane Hughes. Richard Dauch, former CEO of Delphi Technologies, was appointed as the new CEO, effective August 2nd, 2021. He will also join the company’s board of directors.

Workhorse is mainly known for their electric delivery vans, but has also issued plans to develop an electric pickup truck, however put these on hold last year. While the reason for the departure of soon-to-be former CEO Hughes is not entirely clear, he will remain in an advisory position until the end of September and the company stated that the departure was not “a result of a disagreement or dispute with the company”. Hughes will also receive $855,000 in severance benefits.

For his new position, Richard Dauch will receive a base salary of $1 million per year plus a signing bonus of 500,000 shares of restricted stock and $3 million in stock options. He will also be eligible for an annual cash bonus with a target of 125% of his base salary based on specific metrics.

“We are pleased to announce Rick Dauch’s appointment as CEO. He is a strong executive with more than 25 years of industry experience, including 12 years serving in CEO roles with private and publicly traded companies,” said Ray Chess, Non-Executive Chairman of the Company’s Board of Directors. “Rick’s proven team leadership capabilities, industry expertise, customer focus and successful operational track record make him ideally suited to lead Workhorse into its next phase of operational ramp-up and growth during this dynamic industry shift to electric last mile delivery services.”

Geely & Renault to cooperate on hybrids