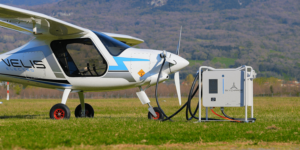 Slovenian aircraft manufacturer Pipistrel and Swiss charging station provider Green Motion had announced the development of the then-unnamed charging solution in July 2020. In the meantime, Green Motion was bought by the Irish-American energy management company Eaton.

However, this was not detrimental to the development of Skycharge: according to Green Motion’s announcement, Skycharge is based on Eaton’s own DC charging technology. This is supposed to achieve a conversion efficiency of over 96 per cent with compact dimensions at the same time. In addition, the charging solution is said to be V2G-capable.

Skycharge is available as a fixed version on a rack or mobile with wheels. In addition to electric aircraft (such as Pipistrel’s Velis Electro), it will also be able to charge eVTOL aircraft. The station has a GB/T plug (i.e. the Chinese DC charging standard), which Green Motion says is used for charging aircraft. However, e-cars can also be charged via the CSS or CHAdeMO plug, which is also available.

“Skycharge is the result of the partnership between Pipistrel and Green Motion – two companies with revolutionary ideas and innovative solutions,” says François Randin, founder and CEO of Green Motion. “By collaborating our world-class engineering teams to shape and define the future of electric aircraft, we strive to provide the best flying experience and significantly reduce flight costs, air pollution and noise pollution.”

The Skycharge charging solution developed by Green Motion and Pipistrel is now being used at Bern-Belp Airport. The station is mainly intended for training aircraft and will be made available to pilots free of charge until the end of 2022, according to Flughafen Bern AG.