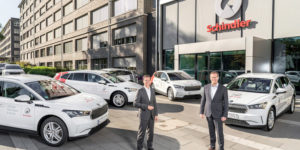 In Germany, the manufacturer of elevator and escalators worldwide has just received 200 fully electric  Škoda Enyaq iV at its German headquarters in Berlin.

The 200 battery-electric Enyaq iV from the Volkswagen Group’s Czech car manufacturer will primarily be made available to Schindler’s service technicians, service managers and sales staff for their business trips.

As part of its sustainability strategy, Schindler Germany plans to convert almost its entire vehicle fleet to electric vehicles by 2024. As part of this plan, employees will also receive a charger for charging their company vehicles at home. For charging at the workplace, Schindler is currently installing charging stations at its larger branches, which are partly supplied with self-generated electricity via photovoltaic systems installed on-site.

“By the end of 2022, we at Schindler will reduce our CO2 emissions by 25 per cent compared to 2017,” says Jörg Naescher, Director Supply Chain and Member of the Management Board of Schindler Deutschland AG & Co. KG. The 200 Škoda Enyaq iV are expected to make a significant contribution in this regard. The electric car has a range of up to 530 kilometres according to the WLTP cycle.

“Schindler Germany is sending a strong signal for sustainability with the consistent conversion of its company fleet to electric cars,” said Peter Kühl, Sales Manager of Škoda AUTO Germany, at the handover of the vehicles. “We’re very pleased that the Škoda Enyaq iV is playing a leading role in this. 200 examples of our successful model are a strong statement. We’re really happy with the cooperation. This also proves that the Enyaq iV fits the requirement profile of fleet customers perfectly.”