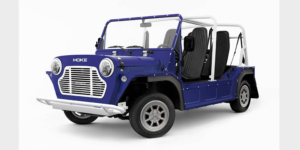 British front-wheel-drive utility and recreational convertible marque Moke will be all electric by 1 January next year. The company has announced the opening of order books today, with deliveries set for Summer 2022.

Prices start at £29,150 or around 34,410 euros (not including local taxes and electric vehicle incentives). The new electric vintage jeeps can be ordered as a right- or left-hand drive.

As of 2022, combustion engine models will no longer be available. The new electric Moke has an acceleration of 0-55 km/h in 4.5 seconds with a top speed of 100 km/h. The drive system has 33Kw of power since the now-electric jeep weighs only 800 Kg. The jeep’s range is 144km and charging takes 4 hours on the Type 2 EU Standard.

Moke looks like a military jeep for a reason. The vehicle was designed by Mini designer Sir Alec Issignois who was tasked to create a vehicle robust enough to be parachuted behind enemy lines from an aeroplane. However, the vehicle only found a few strange deployments in military settings, like oddly turning up in the Falkland’s war. Most people now associate the vintage jeep with 1960s glamour-set that included The Beatles, The Beach Boys and Brigette Bardot. The manufacturers say that this established the jeep’s “legend as the ultimate beach-house-to-waterfront shuttle.”

The small convertible jeep was originally manufactured and marketed by British Motor Corporation (BMC) and subsequently marketed under the Austin, Morris and Leyland brands. The marque has been manufactured in a number of different countries over the years and is currently also used as the basis for the Electric Moke built in the United States by Cruise Car Inc.  The new electric Moke is to be built in the UK at a new facility operated by the Fablink Group.

The Moke marque says it has made a long-term strategic commitment to UK manufacturing which has been enabled by UK government grant funding from the Niche Vehicle Network. Additionally supportive has been the recent trade deal which allows UK automotive businesses tariff-free access to EU markets, based on defined rules of origin.