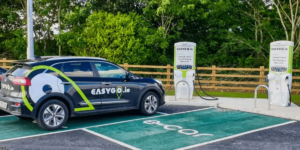 The electric vehicle charge point operator EasyGo has secured 15 million euros of funding. This should enable the company to grow its charge point network across the Irish Republic and expand into Northern Ireland.

EasyGo is based in the town of Kildare about 50 km west of Dublin. The financing gathered from backers that include Rubicon Capital, DunPOrt Capital and Air Core is meant to enable the rollout of 500 rapid chargers.

The charge points will be installed across the island at retail, town centre and hospitality locations. The EasyGo network already consists of 2,300 charging points and is Ireland’s largest electric vehicle charging network operator.

Chris Kelly, Director of EasyGo further said: “Northern Ireland has an acute need for charging points to service its growing number of EV drivers.” Kelly pointed out that, “As the largest privately-owned network on the island of Ireland, EasyGo is in a unique position to quickly roll out this much-needed infrastructure. Our rapid charger network will ensure that EV drivers in Northern Ireland have access to best-in-class EV charging facilities.”

EasyGo is not the only charge point operator on the island. While EasyGo is seeing to the needs of electric vehicle drivers for public charge points, just over a week ago, Ubitricity announced that it will be installing lamp post chargers in Fingal County, which is part of the Dublin Region.

Ireland has been promoting electric mobility across the island with a number of different subsidy schemes and at the end of last year, Ireland’s national transport authority NTA published a tender for up to 800 all-electric double-decker buses for use in the country’s large cities, as well as on some town bus services. This year, Ireland was also one of nine European nations to call for a EU combustion engine phase out date.

Along with this contribution to infrastructure from EasyGo, the island looks like it is rapidly becoming quite an electric place.