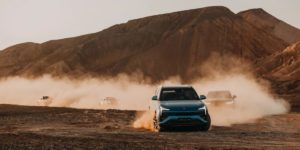 Evergrande New Energy Vehicle plans to raise fresh capital by issuing more shares to six investors. Specifically, about 174.8 million shares at HK$2.86 each will be placed for expected gross proceeds of about HK$500 million (55.5 million euros).

The company plans to use the proceeds for research and development and vehicle production. But the capital raising comes at a price: with Evergrande New Energy Vehicle’s closing price on Tuesday at HK$3.57, the issue price represents a discount of almost 20 per cent.

The fact that Evergrande Auto, as the company is also called, has to grant such a discount to investors is also due to the financial situation at the parent company Evergrande Group. Although the ailing real estate group had stressed that it wanted to stick to the electric car project and rather make electric cars the company’s core business within ten years, investors apparently do not fully trust these statements.

As reported, the first electric model of Evergrande New Energy Vehicle has recently been officially listed in the catalogue of the Chinese Ministry of Industry and Information Technology (MIIT) and is scheduled to go into production in early 2022.