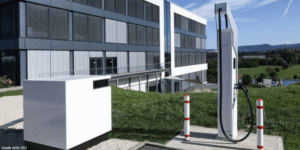 ADS-TEC Energy, a German provider of battery-based fast charging technology, will supply 20 ultra-fast charging units to Smart City Capital (SCC) in the USA. The order volume could grow significantly, with a letter of intent signed for an additional 180 charging stations in 2022.

The battery-buffered charging stations from ADS-TEC Energy will be used in the Miami metropolitan region in the US state of Florida. The equipment ordered will enable charging at up to 320 kW. Thanks to battery storage, the charging points can also be deployed in low-voltage grids and areas where HPC would not otherwise be possible – without grid expansion, ADS-TEC Energy points out.

“Our battery-buffered technology brings ultrafast charging speeds to urban areas, and we are pleased to be a leading provider of EV charging infrastructure for SCC,” said Thomas Speidel, CEO and Founder of ADS-TEC Energy. “This partnership showcases the attraction of our charging systems and the increased efficiency, operating costs, and customer satisfaction that smart cities can deliver.”

The company, based in Nürtingen near Stuttgart, Germany, had established its US subsidiary in early October to strengthen sales in North America. The move did not come as a surprise – in August, the company had announced that it would go public on the New York stock exchange via a SPAC deal. At the time, it said that “a substantial portion” of the proceeds from the IPO would be used to “accelerate the expansion of ADS-TEC’s storage solutions and energy management platforms in the US and Europe, and to continue the development and enhancement of the company’s existing technology platforms.”

As a result, ADS-TEC Energy partnered with Smart City Capital in October, resulting in the set order and the letter of intent. “This will bring ultrafast charging speeds across the Tri-County area,” said Oscar Bode, CEO of Smart City Capital. The Tri-County area includes Miami-Dade, Broward and Palm Beach counties – in other words, the Miami metropolitan region. “The ADS-TEC Energy chargers will enable public and private applications at the individual and fleet-level use cases, and we look forward to expanding this approach and solution beyond South Florida,” Bode continued.

ADS-TEC’s battery-buffered charging platforms, notably ChargeBox, enable higher charging speeds on low-powered grids and in areas where it would not otherwise be practicable. The company claims that rates of up to 320 kW on existing, lower power grids are within range.

For its part, ADS-TEC expects the partnership with SCC to have a “material, positive impact on the company’s performance in 2022” – as the deal was not initially included in the business plan submitted in June of this year. The company remains part-owned by Bosch Thermotechnik GmbH (“Bosch”).

British EO Charging expands into the US market