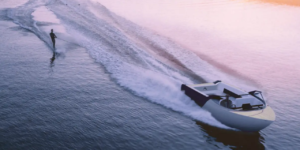 Arc Boat, a Los Angeles startup, has announced another $30 million in investment that should help finance its first production run. This will consist of about 25 vessels of a model dubbed the Arc One.

The new boats should have a 200-kilowatt-hour battery pack that will power its craft for three to five hours. The founders estimate that this is enough for the usual day on the water of water-skiing and boating fun.

The company – that is not yet a year old – sees that the marine sector is now headed for rapid electrification since there are fewer hurdles to battery-electric motors than road vehicles because battery weight is less of an issue in the water.

Arc says that around a month after the company was launched, it had secured $4.5 million in a round led by Andreessen Horowitz, which is the venture capital firm behind many of Silicon Valley’s greatest hits. In July, had built a prototype craft that the founders say they promptly took waterskiing.

In terms of the market segment, at $300,000, the new Arc speed boat is roughly 50% more expensive than a comparable gas-powered vessel. Arc is estimating that the vessel will have greater value because of the far quieter motor, which will of course also be free of toxic fumes. According to law.com, Arc is not too worried about finding customers since the first 25 vessels are already spoken for and they say the waitlist is growing.

On their website, the company says deliveries will begin this coming spring.