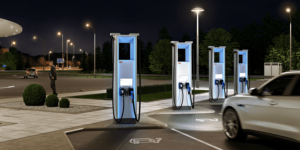 Swiss-Swedish technology group ABB is aiming to spin off its electric mobility division with its charging station business in the first half of 2022 and list it on the Swiss stock exchange. The company made the announcement on its capital markets day.

ABB says that the legal separation should be completed in the first quarter of 2022 and that the timing of the IPO will then depend on market conditions. If these remain favourable, the IPO could take place in the first half of 2022, with ABB making quite clear that it intends to retain a majority stake in the future listed company thereafter.

ABB appears to be aiming to sharpen its focus with each area as the company expands with the increase of interest in zero-emission transport. CEO Björn Rosengren says: “Over the last 24 months, ABB has made solid progress in implementing its decentralised organisation and improving quality of revenues. But we are still not where we want to be,” he explains. “… a sharpened focus on accountability, transparency and speed in 2022 will help drive growth, lift profitability and create further value for shareholders.”

Commenting on the importance of its “sustainable transport product portfolio”, ABB said that this now accounts for around 10 per cent of ABB’s overall order intake. The Swiss-Swedish company says it has achieved above-average growth in this sector over the past five years, with an estimated annual growth rate of 17 per cent, and expects to continue outperforming the market, which is expected to grow at double-digit rates in the medium term. Important product drivers are charging stations for electric cars and buses, drive systems for railways, trucks and mines, and green hydrogen technologies for shipping.

ABB’s Robotics division is also benefiting from the electric car boom. According to the group, it is the second-largest supplier of technologies for assembling the drives, batteries and bodies of electric vehicles, as well as for painting and sealing them.

Regarding its charging infrastructure business, ABB had recently announced that it sold more than 460,000 charging stations for electric vehicles in over 88 markets since 2010, including more than 21,000 DC fast-charging stations and 440,000 AC charging stations. This year alone, ABB has unveiled two more fast chargers: in September, the Terra 360, with a maximum power of 360 kW and the ability to serve up to four vehicles simultaneously. And in April, the third generation Terra HP (High Power), which can charge one e-car with up to 350 kW and 500 A or two vehicles simultaneously with up to 175 kW and 375 A.

ABB has published an update on the announced spin-off. The Swiss technology group expects the IPO of its e-mobility division with its charging station business to generate revenues of at least US$750 million, CEO Björn Rosengren has now announced. ABB plans to list the division on the Swiss stock exchange SIX in the second quarter despite market turbulence.

According to insider information, the listing could take place in mid-April. Sources familiar with the transaction told Handelsblatt that ABB could place around a quarter of the shares at a valuation of around three billion dollars. ABB would not comment on the information.

Contrary to the announcement, the IPO will no longer take place in June. ABB is postponing the IPO of its e-mobility division with its charging station business indefinitely, which was planned for the second quarter of 2022. The Swiss-Swedish technology group has now officially announced that this is due to the current challenging market conditions. ABB is closely monitoring the market situation and is “determined to bring the company to the SIX Swiss Exchange when market conditions are constructive”.

BP acquires Amply Power in the US