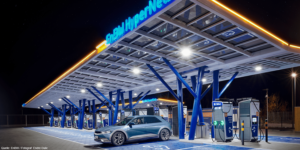 In Germany, the energy giant EnBW has now officially opened one of the largest fast-charging sites in Europe at Kamener Kreuz. This is where up to 52 electric cars can charge simultaneously and with up to 300 kilowatts of peak power.

The new charging park services the Kamener Kreuz, which is an intersection located in the Rhine-Ruhr metropolitan region connecting highways across Germany with highway 1  in the north-south direction and highway 2 in the west-east direction to Berlin. This highway intersection is used by an estimated 160,000 vehicles per day.

The company responsible for the charging park, EnBW Energie Baden-Wuerttemberg AG, is a listed energy supply company headquartered in Karlsruhe, Germany, and is the third-largest energy company in Germany in terms of revenue after Uniper and E.ON. The EnBW HyperNetz operates over 200.000 charging pints in 9 European countries. The company currently operates around 50 large charging parks throughout Germany.

The German energy supplier EnBW announced the large facility in Kamen in April of this year. At that time, it was already said that the opening was planned for the fourth quarter. Despite tight civil engineering capacities and semiconductors, the schedule was met: The plant went into operation on 3 December, and the official opening took place yesterday on December 14.

The site is equipped with 26 Alpitronic HYC300 Hyperchargers, which can charge one vehicle with up to 300 kW or two vehicles with up to 150 kW each. Along the trunk roads, EnBW primarily relies on this charging column type, while HYC150 (1x 150 kW or 2x 75 kW) are also used in some cases for inner-city fast charging parks.

The covered charging stations have a solar roof, which is common for these charging parks. Here in Kamen, the system has a capacity of 120 kWp. The mega-charging park also has toilets and covered seating facilities.

The virtual event was opening the charging facility was attended by Hendrik Wüst, Minister-President of the state of Nordrhein-Westfalen who opened the “flagship charging park” with EnBW CEO Frank Mastiaux.

Minister-President Wüst called the nationwide charging infrastructure a key prerequisite for a successful market ramp-up of electromobility. “With this outstanding project at the highly frequented Kamener Kreuz site and the opening of one of the largest fast-charging parks in all of Europe, we are reaching another milestone on the road to the mobility of the future,” said the politician from Germany’s centre-conservative party, the CDU. “This consistent expansion is needed to successfully shape the transport transition and mobility of the future in the long term – especially here in the commuter state of North Rhine-Westphalia.”

On the part of EnBW, CEO Mastiaux took part in the opening and used the stage to make an appeal to the new federal government. “The new federal government wants to make Germany a lead market for electromobility. For this to succeed, we need more torque in expanding the charging infrastructure,” Mastiaux said. “In doing so, we can learn from the energy turnaround: we should avoid overregulation, prioritize market-driven expansion – and implement planning, approval and funding procedures more quickly in the future.”