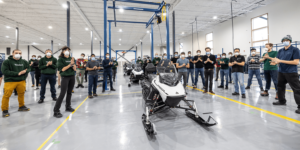 Today, Taiga Motors, a Canadian Powersports specialist, announced it has made its first electric snowmobiles and will commence deliveries this year. The take-off comes after delays in production and when pre-orders had opened in 2019.

At present, Taiga says it was working with government agencies on final approvals to begin deliveries in early 2022. Production, therefore, started almost two years after the company began to present prototypes of zero-emission snowmobiles and jet skis.

Depending on the model, the power output is up to 132 kW, enabling the EV at less than 300 kilograms to accelerate to 100 kph in 2.9 seconds. According to the manufacturer, the 27 kWh battery allows riding up to 140 kilometres.

Taiga offers three versions for mountainous terrain, crossover/all-terrain and utility/touring. Prices start at $17,490 (15,640 euros). If ordered online today, Taiga gives a delivery date of autumn 2022, not only in North America but also in Europe.

The relatively late delivery is likely due to the supply chain issues which had befallen the entire industry. Taiga CEO Sam Bruneau said he was “proud of the demonstrated ability and perseverance from employees who together have overcome challenges as we navigate unprecedented supply chain volatility.”

The company adds that it has focused on ramping up production rates through several build and testing phases over the past year. Spring 2021 also saw the company list publicly via SPAC deal as reported. Bruneau at the time said that they would use the funds “to accelerate our existing production capabilities and execute on our pre-orders while moving full speed ahead with plans for a second, mass-production facility, which will significantly increase our capacity by 2025.”

So far, Taiga operates one factory in Montréal and has yet to publish capacities.

At the same time, Taiga has been installing charging infrastructure in remote areas. Its electric off-road charging network launched last autumn has since seen the installation of on-water charging stations. In today’s announcement, the company said it also began installing its first off-road charging stations as part of a trail loop through the forests of the Mauricie and Lanaudière regions in Québec. These first charging locations each feature Level 2 chargers and two Level 3 DC Fast Chargers resulting in the first long-distance snowmobile trail in the world with access to charging stations, according to Taiga. The hardware is delivered by ABB and their AXC and DC wall box in the Terra line. Taiga aims to unlock 75,000 km of off-road trails and waterways by 2025.