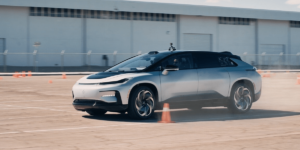 Faraday Future has unveiled the version of its first model planned for series production. Production of the FF 91 is scheduled to begin in Hanford, California, in the third quarter of 2022.

According to the company, they have reached the fourth of a total of seven milestones on the way to the start of production: the first pre-production vehicle has been built at the Hanford plant for final technical validation and certification. FF itself calls these specimens “production intent vehicles.” They are technically equivalent to series production.

“Building the first production-intent vehicle at the Hanford plant is an important step towards reaching the start of production in Q3. This iteration is the closest to the FF 91 production model we’ve seen to-date,” says Matt Tall, vice president of manufacturing at FF.

However, no details on the technology are given by Faraday Future in the announcement. All that was released were some images from quality control at the factory and of a driving FF 91 in the “Production Intent” version.

The FF 91 – like the entire company – has had an eventful history. First shown at CES 2017, the FF 91 prototype forced the company to cut its ambitious plans just a short time later and was on the brink of failure several times. Accordingly, the production start originally planned for 2018 could not be maintained. In September 2019, former BMW manager and Byton boss Carsten Breitfeld took over the CEO post at FF and brought the company out of the headlines to plan the new beginning in the background.

With production of the FF 91 scheduled to start this year in California and a recent partnership with South Korean automaker Myoung Shin to produce its second model, the FF 81, Breitfeld’s course seems to be confirmed so far.

California-based electric startup Faraday Future will be able to launch its debut FF 91 model without additional funding during the third quarter of 2022, CEO Carsten Breitfeld told Reuters. However, he said the company will need additional capital later this year. Faraday Future expects to produce between 6,000 and 8,000 units of the FF 91 in 2023.

As reported above, the FF91 will initially be built in California. Breitfeld said in the interview that they are in talks with the government and partners in China to start production in the country. He also said that the discussions are still in the early stages.