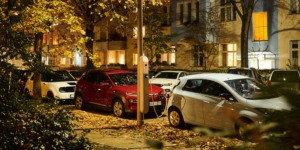 Shell subsidiary Ubitricity has placed the winning bid in a public tender issued by the city of Berlin to install at least 200 lantern charging points. The company will begin integrating the first charge points in autumn this year.

According to the Shell subsidiary, the roll-out will start in the outer Berlin districts of Steglitz-Zehlendorf and Marzahn-Hellersdorf. Ubitricity uses charge points of type Heinz here, which the company developed explicitly for the German market together with Ebee.

The background: German standards had ensured, among other things, that an initial contract awarded for 1,000 lantern charge points in Berlin failed. In September 2020, lawmakers found Berlin’s lampposts too narrow to integrate Ubitricity’s technology legally. The calibration law posed another hurdle.

Heinz, however, is now expected to meet these requirements. When asked about the charging power, Ubitricity stated when presenting Heinz in October 2021 that the charge point offers up to 4.6 kW at 230 volts and 20 amps single-phase. However, the standard in public spaces is usually 3.7 kW, and the current communication on the Berlin order also puts the power as such. Instead of a special cable with an integrated meter, only an ordinary Type 2 cable is required. The technology installed in the charge point starts and manages the charging process. Residents can charge with their usual tariffs from a Mobility Service Provider (MSP), such as Shell Recharge, or ad-hoc using a mounted QR code. Ad-hoc charging works without registration or membership.

The current order for the 200 charging points is part of the renewed tender for 1,000 charging points in November 2020, after the first tender failed, as mentioned. If the project extension already applied for by the state of Berlin is approved, up to 800 additional lantern charging points could be installed.

Over in the UK, ubitricity has made successful bids and installations before. New owner Shell announced in September last year that it would finance the installation of 50,000 ubitricty charge points in the UK by 2025.