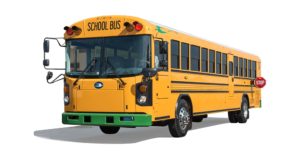 The US bus maker Blue Bird has received an order for 30 electric school buses from Modesto City Schools in California . The order will enable the school district to convert nearly half of its diesel-powered bus fleet to clean energy.

The Blue Bird electric buses purchased by Modesto City Schools are called All American Type D. The vehicles should be delivered in the fourth quarter 2022. Blue Bird electric buses can carry a maximum of 84 passengers. The buses take between three and eight hours to fully recharge depending on the charging infrastructure, and have a range of up to 120 miles (about 193 kilometres) on a single charge.

According to Blue Bird, some of its customers have reported fuel costs of up to 49 cents per mile for their diesel buses. This compares to an average energy cost of 14 cents per mile for electric buses. With this order, Modesto City Schools anticipates saving more than $250,000 a year in fuel costs alone.

The purchase has been partially funded by California’sHybrid and Zero-Emission Truck and Bus Voucher Incentive Project (HVIP), which is a program that was launched by the California Air Resources Board (CARB) in 2009. The HVIP project is administered by CALSTART, a national nonprofit consortium for clean transport.

Blue Bird is a legacy busmaker that received all required certifications for its electric school buses in April 2018. Around two years later, the company had to ramp up production to keep up with demand.