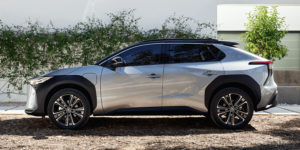 Toyota’s first purely battery-electric passenger car model bZ4X has been made available for reservations online. The entry-level version costs from £41,950. Pre-sales are to start in April 2022, with the first deliveries scheduled for early summer 2022. Now, Toyota has also published the homologated WLTP ranges and fuel consumption figures.

Toyota stated that the bZ4X, as the brand’s first stand-alone electric vehicle, marks the beginning of “a new era”. The Japanese carmaker had already unveiled the model last year, and since then the technical data on the first model based on the e-TNGA platform have also been known.

Shortly after the end of the reservation period, Toyota published the homologated WLTP ranges and fuel consumption figures for the bZ4X – previously, there were only provisional values. Instead of “more than 450 kilometres”, it is now concrete: the front-wheel-drive version reaches up to 516 kilometres. The all-wheel-drive model still has a range of 470 kilometres.

The power consumption is given as 14.3 kWh (front-wheel-drive) or 15.8 kWh (all-wheel-drive) per 100 kilometres. Deliveries of the Toyota bZ4X in the first European markets are still scheduled for summer 2022.

Weighing around 2 tonnes, the electric mid-size SUV will be available with a choice of 150 kW front-wheel-drive or all-wheel-drive, combining two electric drives with 80 kW each. The battery has an energy content of 71.4 kWh and is said to enable WLTP ranges of more than 450 kilometres. The maximum DC charging power is specified at 150 kW. Charging to 80 per cent is said to take around 30 minutes. For AC charging at 11 kW, a three-phase onboard charger will be available from the end of 2022. Until then, the bZ4X will only charge at 6.6 kW. All power specifications are still preliminary before homologation, Toyota emphasises.

Starting from this month, reservations have to be converted into binding orders, which will be among the first appointments at the planned start of deliveries in early summer. According to the announcement, interested parties will receive a “non-binding offer including the expected monthly instalments”. According to the configurator, the instalments range between 342 and 485 euros per month, depending on the equipment – but based on a special leasing payment of 8,340 euros.