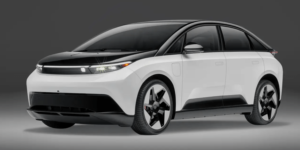 The Californian start-up Independent Electric Vehicles (Indi EV) presented its first electric car at the New York Auto Show. The Indi One can be reserved now, and production is scheduled to start in mid-2023.

As written in the reports surrounding the premiere at the New York Auto Show, the One EV will be offered in Europe at a later date. Details on this are not yet known. So far, the company plans to start production for the US market in mid-2023. The only thing that is not clear is where the company, founded in 2017, plans to build (or have built) the cars.

There is also little information about the vehicle itself – not even Indi EV itself lists the dimensions of the car on its homepage. So the size can only be estimated from the pictures – the crossover model is likely to be in the popular size class around 4.80 metres in length. Some observers see great similarities to a Tesla Model Y, and not only because of the curved roof arch.

Indi EV has collaborated with numerous partners in the development. According to Autocar, the seats are from Faurecia, and Indi EV worked with Tata on the air suspension and the chassis.

While the dimensions are unclear, the company is more specific about the drives. Two variants are currently planned: The Indi One Standard is a rear-wheel-drive car with one engine. This produces 205 kW and accelerates the car to 60 mph or 96 km/h in 6.7 seconds. In this version, a 75 kWh battery with a range of 370 kilometres is installed – presumably, this is a specification according to the EPA standard, not according to WLTP.

The Indi One Premium is more or less the same as Tesla’s long-range models: it has a larger battery and an all-wheel-drive system. The power storage comes to 95 kWh, which is supposed to be enough for up to 480 kilometres – in both cases there is no information on the cell chemistry. The all-wheel-drive with a second motor on the front axle produces 349 kW and 730 Nm, which is supposed to reach 96 km/h after 4.25 seconds.

The US prices have already been set: for the Standard, Indi EV quotes 45,000 US dollars or around 41,600 euros. The Premium is listed at 69,000 dollars or 63,800 euros. However, the US prices are net; what an imported vehicle would later cost gross in Europe is unclear.

The surcharge to the Premium model is not only due to the larger battery and the additional engine: The more expensive version includes a particularly powerful computer called the ‘Vehicle Integrated Computer’ (VIC). This is supposed to be compatible with Windows 10 and Android Auto. The basic idea is that since users spend a lot of time in the car, it is supposed to offer electronic functions that are also available in their own home or office. The VIC enables internet surfing, video streaming, games or even forms the basis for a mobile office. “We believe that the future of EV technology is going to be measured more in processing power than horsepower,” says design chief Andre Hudson.